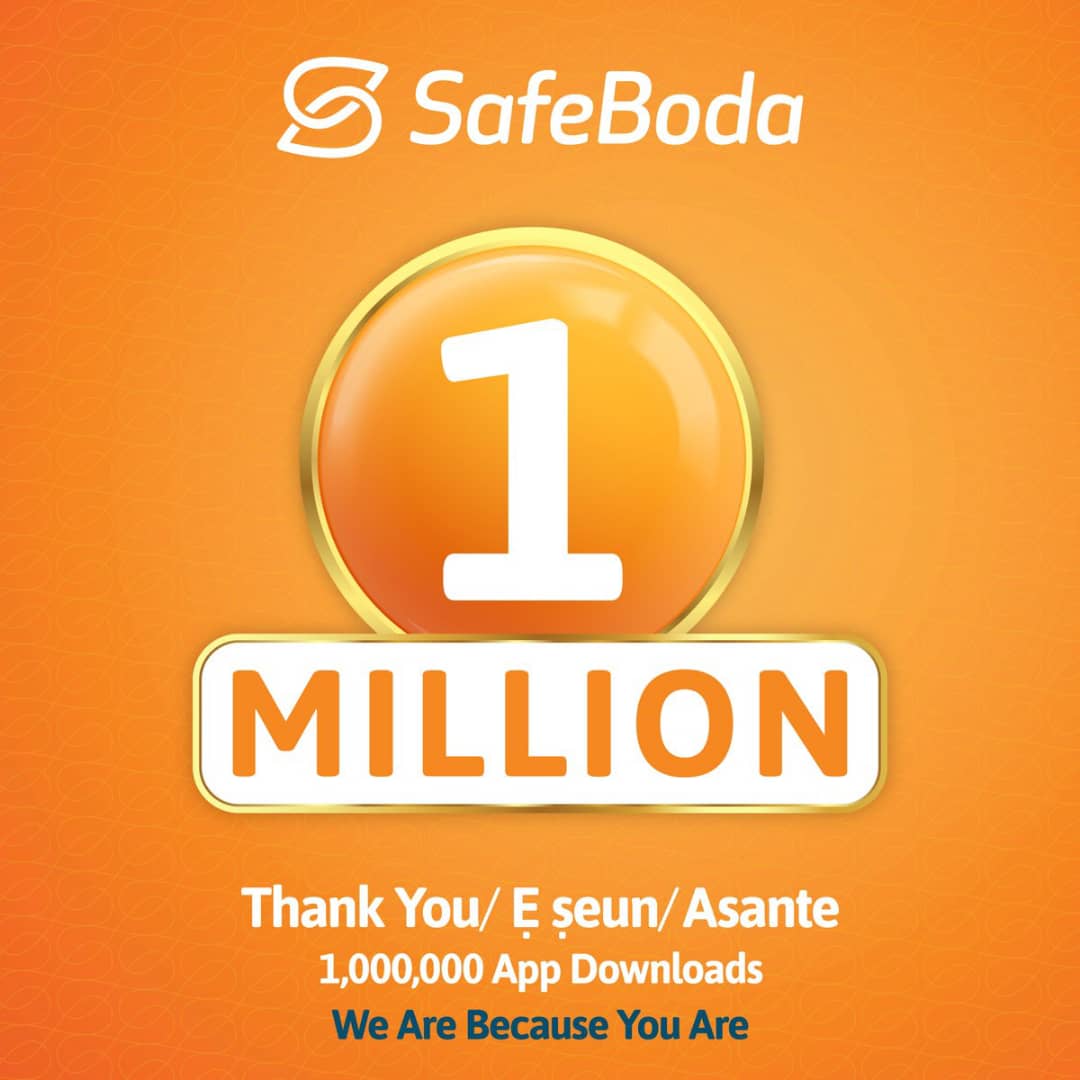 Uganda’s most popular, safest, fastest and most affordable way to get around Kampala boda boda hailing company – SAFEBODA yesterday did officially make It to 1,000,000 downloads; (one million installs). These numbers only account for Google Play Store alone by the way; meaning that the statics could even swell the more for the case that we include users of the Apple App Store too whose figures aren’t certain yet. It was with great joy that SafeBoda took to their Twitter to announce to their 10K plus followers on social media about this achievement in a post thanking them for the downloads, and trusting them as their preferred transport service.

The transportation startup that goes by the slogan: “your city ride” owns a mobile application that enables users to get access to a professional, trained boda boda rider direct to your location at the click of a button. No more walking to the nearest stage or getting on the back of a stranger’s bike (since each SafeBoda riders’ names are written at the back of their orange jackets/ reflectors). This does mean that with SafeBoda you as a user gets to get enjoy full comfort and an amazing on-the-road experience with SB.

As a transportation service that provides you with a safe, clean boda you can trust is one of the many reasons SafeBoda does keep registering more users each month hence the increased downloads. Each SafeBoda rider is trained in road safety and first aid. They are also vetted for trustworthiness and have a name and a number to identify them if there are any issues.

Users also get a great fare price. This is because the SafeBoda app calculates and provides a fair, standard, and transparent price estimate on every ride and this saves the user the hassle of bargaining. Top of this is a helmet that comes in a pair; every SafeBoda has a spare helmet and a hairnet for passengers; just like cars are manufactured with seatbelts and airbags, helmets for this matter are provided for the case of boda bodas because: SAFETY COMES FIRST. Some riders even have umbrellas on top of their “jajjes” (motorbikes) for the case of harsh weather conditions like rain or even a very hot sunny day.  After ordering your ride, it’ll have arrived in minutes and will ready to drop you to your next destination safe, fast and cheaply. 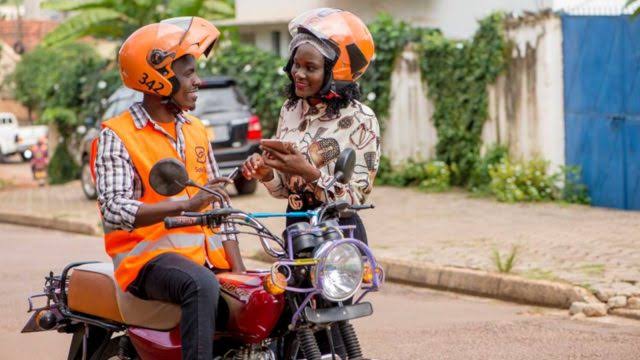 Basically, SafeBoda is a community of entrepreneurs and boda riders who work together to improve professional standards across the urban transportation industry in Uganda; all together with one aim – to improve the industry for both drivers and passengers by increasing the number of safe trips taken per day and by making travel around cities convenient and stress-free. You could ask yourself: Why choose SafeBoda?

Well, a UN report showed that 10 people die daily in Uganda due to traffic accidents while boda boda related accidents account for the highest number of victims. Generally, traffic accidents cost the country Shs 4.4 trillion every year; largely due to the lack of professionalism and regulation in the industry: which is where SafeBoda comes in and does exist- to modernize the informal transportation industry by ensuring safe access to mobility. Safeboda, as a community is trying to change this by enforcing road safety by ensuring their drivers adhere to traffic laws and promote helmet-wearing and visibility in traffic through an all-round and extensive training program to make them the safest and most professional drivers on the streets. This is because they are not only trained in road safety but first aid administration, bike maintenance and customer care too. Top of which include hairnets, a spare helmet, are Identifiable and trackable through the SafeBoda system since all trips are monitored and followed up on the radar.

And being that motorcycles (boda-bodas) are the lifeblood of many large cities in Uganda, but they are disorganized, informal and extremely unsafe. At the click of a button, SafeBoda provides a safe, convenient, mobile-first platform for urban mobility for Africa’s booming young population.

What started as a business experiment to ensure safety of boda boda riders after one of SafeBoda’s founders; Ricky Rapa Thomson (one of the brains behind Safeboda) lost a dear friend in a motorcycle accident as he eked out a living as a boda boda rider as he had just arrived in Kampala alone, with no relatives or close ones has grown to become a big business in Kampala and beyond. The loss of his friend and colleague was hard to take in hence birthing his decision that something about the boda boda business needed to change hence later teaming up with Maxime Dieudonne and Alastair Sussock to make Safeboda in 2015. The idea of coming up with an app for the service was suggested by Dieudonne and took them two years to come up with the right app; said Thomson during an interview at the Safeboda headquarters in Bukoto.

During the app’s humble beginnings, three versions of the SafeBoda app were released. With time they went out on the market but with time they realized that the applications were not to a standard the team really wanted. For instance, in the first version, you would have a list of Safebodas, and you would just have to pick one you would want to come and get you. It wasn’t like ‘Who is the closest person?’” revealed communications Manager at SB.  She continues to say that; “We reached a point where GPS became such a challenge to use; so, we created the next version of the app linked to a call center. You would request, and it would go to a call center that would then manually dispatch a driver.” It still wasn’t easy to understand for customers and the app was ultimately dismissed in favor of the current one, which was launched in February 2017, where GPS was integrated and the drivers were given smartphones.

The motorcycle hailing app has ever since proven to offer a lot more than just a ride to your destination. Just about a month and a half ago, they rolled out SafeBoda Food and was to serve as your next stop when it comes to ordering local food – in what was dubbed as #SBFood during the campaign period. With sticking to its original rule of safety in innovation, the SafeBoda app keeps outdoing itself with each app update. We have seen the company roll-out new features which include: sharing SafeBoda cashless with a friend, sending a parcel or package using a SafeBoda, and buying airtime for yourself or a friend. Now, any SafeBoda can top up a passenger or customer’s Cashless account in exchange for an equal amount of money – as simple as that. 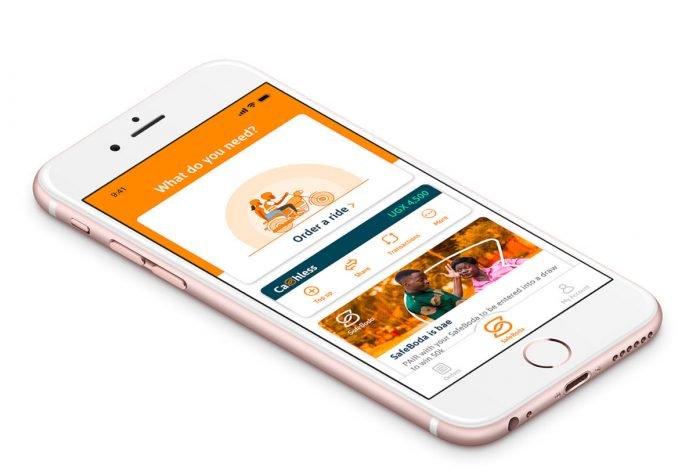 Safeboda has also transformed the mindset of boda boda riders and their relations with customers. There has also seen a change in the mind of the boda riders, where 100 per cent wear a helmet every single day.

Safebodas are trained to help in case of an accident and will stop to assist whenever there is one.

The focus on safety has paid off and today, Safeboda has trouble following up on the high demand by customers. Safeboda has changed his life for the better, while also transforming road safety in Kampala.

With the recent expansion and commencement of operations in Nigeria, the sky is not even the limit for this startup. Once again, Congratulations SafeBoda. 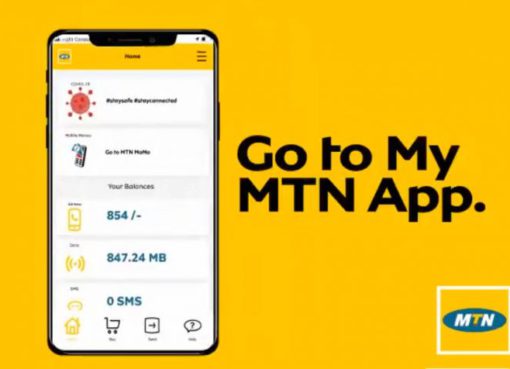 How to get free data using the myMTN App referral program:

In the year 2015, the myMTN App was launched and since then, the all-in-one self-care mobile applica
Read More 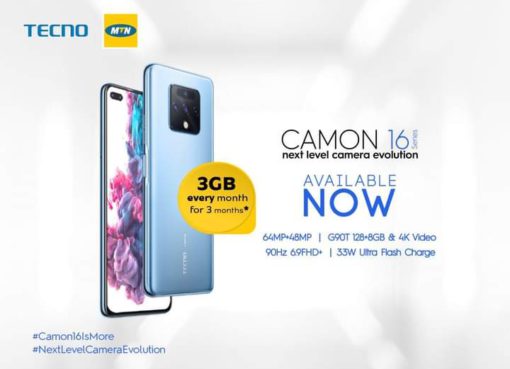 There’s been speculation when it comes to the TECNO Camon 16 series’ arrival on the Ugandan market,
Read More 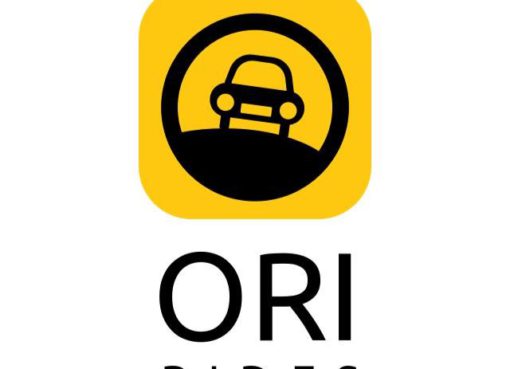 Ever since the smartphone era took off here in Uganda, a lot of innovations have since come into pla
Read More